What are the ecosystem impacts of Pacific sardine harvest? 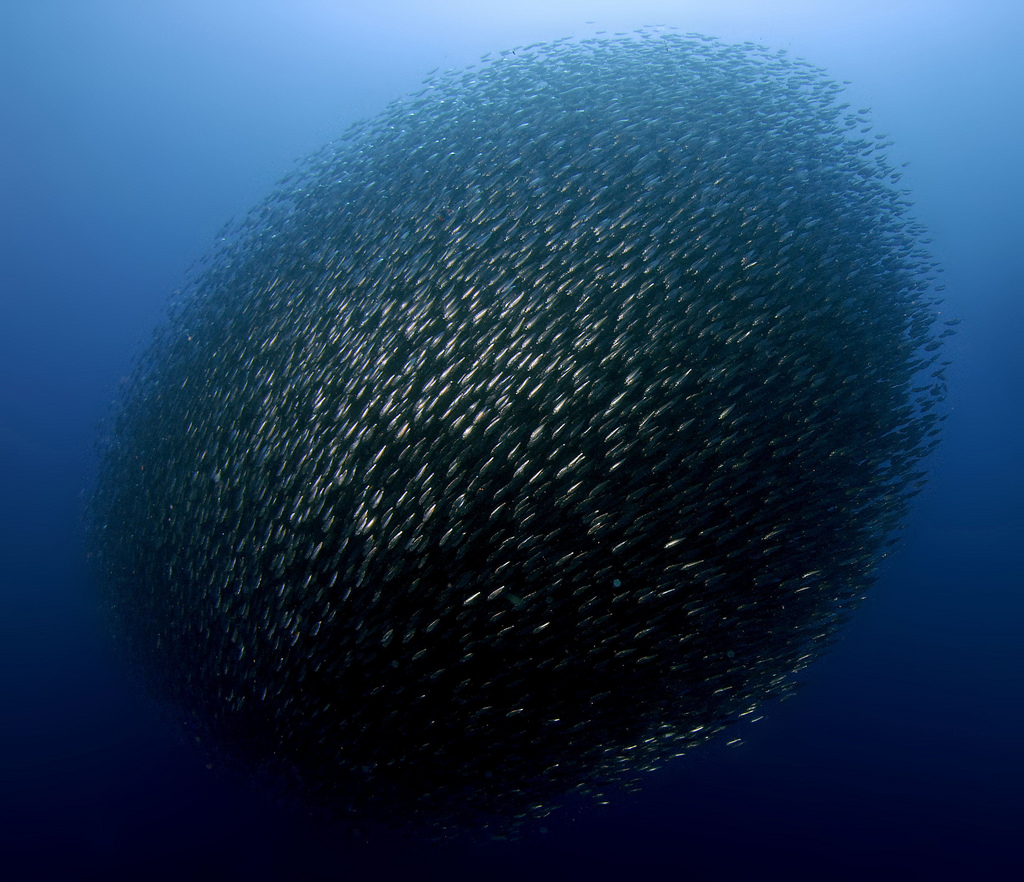 Ecosystem approaches to managing the world’s fisheries are hampered by the lack of appropriate analytical frameworks and modeling tools.

Decision makers want to know which policies are most robust over the full suite of alternative scenarios, given uncertainty about the future. Can using multiple models move us closer to implementing ecosystem-based fisheries management by evaluating the ecosystem impacts of existing harvest rules?

What are the ecosystem impacts of Pacific sardine harvest rules?

Our knowledge of food web processes in marine ecosystems continues to grow. Information is available describing local and regional-scale oceanographic drivers of primary and secondary productivity. The Working Group’s aim is to develop an integrated modeling approach to evaluating harvest effects on the target stock, the fisheries that depend on this resource, and on the dynamics of the west coast ecosystem. 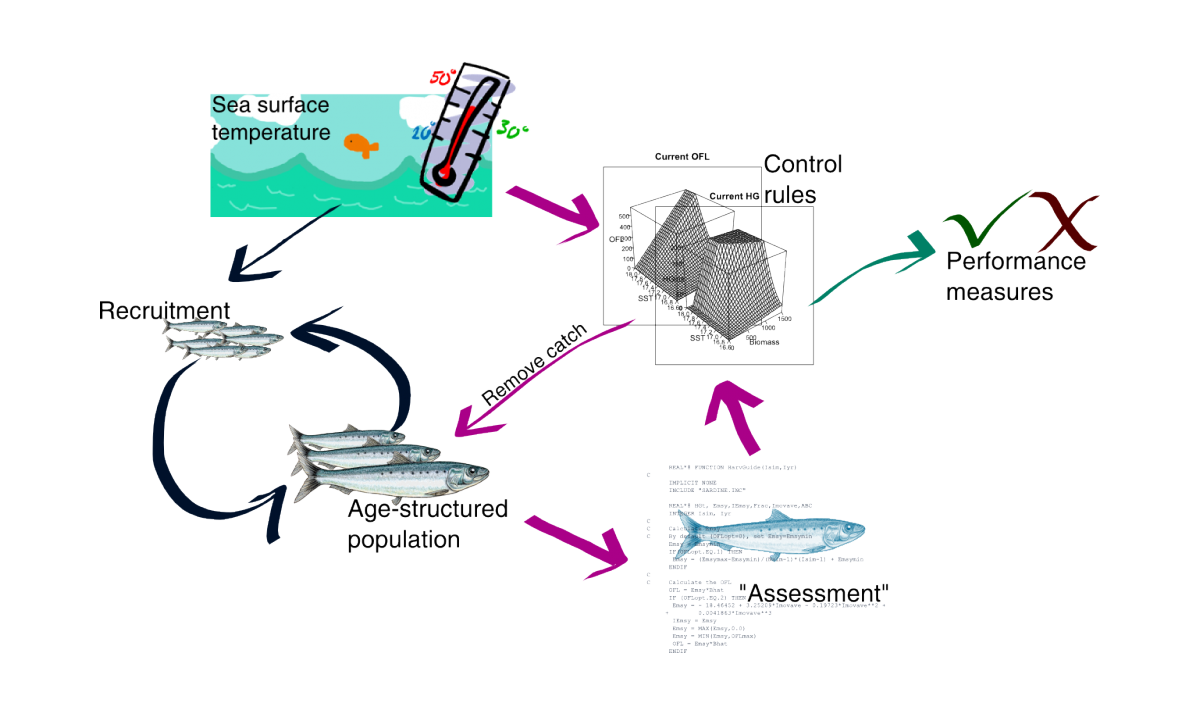 The aim of this Working Group is to investigate how complex models can be used to inform Pacific sardine management on the west coast of North America.

Scientists and managers are integrating models to explore key environmental and management consequences of sardine harvest. The goals are to:

This working group will answer the questions:

How does the harvest control rule impact

Currently, projects that Dr. Punt is undertaking with his research group include integrating genetic methods with traditional fisheries management approaches, assessment and management methods for data-poor methods, and understanding the impact of climate change and environmental variation on the performance of assessment and management methods. Dr. Punt has conducted stock assessments for a wide range of species, ranging from anchovies and sardines, to groundfish, tunas, and cetaceans. Dr. Punt has published over 250 papers in the peer-reviewed literature, along with over 400 technical reports. He was recently a member of a National Research Council panel on evaluating the effectiveness of fish stock rebuilding in the United States. Dr Punt is currently a member of the Scientific and Statistical Committee of the Pacific Fishery Management Council, the advisory committee for Center for the Advancement of Population Assessment Methodology, the Crab Plan Team of the North Pacific Fishery Management Council, and the Scientific Committee of the International Whaling Commission.


Phil is a conservation scientist who is interested in bridging the gaps between theory and practice and between social and natural sciences. The main focus of his current work is developing interdisciplinary tools to inform conservation of marine, aquatic and terrestrial ecosystems and the communities that depend on them.

Prior to joining the Nature Conservancy and University of Washington, Phil was a Senior Scientist at NOAA Fisheries’ Northwest Fisheries Science Center in Seattle, WA, USA. He served as the scientific lead of NOAA’s Integrated Ecosystem Assessment efforts in the California Current Large Marine Ecosystem and Puget Sound. In the course of this work, he led the development of new analytical tools for characterizing ecosystem health and forecasting the cumulative effects of coastal zone management and climate change on marine ecosystems.

Phil received the Department of Commerce Silver Award and NOAA’s Bronze Medal for his work on marine ecosystems, and the Seattle Aquarium’s Conservation Research Award for his work in Puget Sound. He has published over 150 scientific papers in peer-reviewed journals, book chapters and technical reports, and edited the recent book, “Conservation of the Anthropocene Ocean: interdisciplinary approaches for nature and people”.

Phil’s work has been featured in such news outlets as NPR, PBS, the BBC, MSBNC, The Economist, among others. He recently served as President of the Western Society of Naturalists, and served on numerous editorial boards and scientific advisory panels. Phil received his Ph.D. in zoology from the University of New Hampshire in 1993 and was a postdoctoral fellow at the University of North Carolina.In recent years, he have been particularly interested in the social-ecological-systems of temperate rain forests from Washington to Southeast Alaska.


Tessa is the Lead Ecosystem Ecologist at the University of Washington Tacoma’s Puget Sound Institute, and the Managing Director of the Ocean Modeling Forum. Dr. Francis is an aquatic ecologist, and she conducts research related to the ecology and management of Pacific herring. She is interested in terrestrial-aquatic linkages, and the impacts of those linkages on ecosystem function and management. Across all her work, Tessa focuses on linking science to decisions, which includes a keen interest in decision support tools, including models and multi-model approaches. Tessa also serves as the Ecosystem-based Management topic editor for the Encyclopedia of Puget Sound, and is on the Science Advisory Board of the Northwest Straits Commission. Tessa holds a BA in Political Science from UC Berkeley, a BS in Wildlife Science from the University of Washington, and a PhD in Zoology and Urban Ecology from the University of Washington.


Tim Essington in an associate professor at the University of Washington’s School of Aquatic and Fishery Sciences in the U.S. Essington’s research and teaching aims to better understand human impacts on marine food webs and to identify policy instruments that are most effective at minimizing them. He works in diverse ecosystems, ranging from estuaries to coastal and open oceans, and uses a wide range of quantitative tools to evaluate how ecological systems respond to fishing and other disturbances. He also serves as a principal scientist with the Climate Impacts Group at the University of Washington where he leads work that seeks to better understand the consequences of climate change on regional fishery ecosystems.

Essington is a member of several advisory and editorial boards. Currently he co-chairs the Scientific Steering Committee for the joint U.S. National Science Foundation and National Oceanic and Atmosphere Administration (NOAA) research program “Comparative Analysis of Marine Ecosystem Organization.” He also has been on the Science Advisory Board for the National Center for Ecological Analysis and Synthesis. He currently serves on the NOAA Science Advisory Board Ecosystem Science and Management Working Group. He is actively engaged in fostering ecosystem-based management at a regional level, presently co-authoring a comprehensive assessment of the biophysical status of the Puget Sound ecosystem.


Kelli is a quantitative ecologist with a Masters in Resource Management from Simon Fraser University, British Columbia, Canada. Prior to earning her Masters she worked as a field biologist for Cascadia, a non-profit marine mammal research collective in Olympia, Washington. Her work focused on the ecology of blue whales and when and where they were more likely to come into contact with shipping vessels. Currently, her work at the University of Washington is focused on fisheries stock assessment. More specifically, her dissertation aims to improve multi-species stock assessment methods by developing methods that can provide tactical management advice. Additionally, she is working with Dr. Isaac Kaplan on developing stock indicators for species without assessments or are grouped into stock complexes using Atlantis as an operating model.


Isaac Kaplan is a Research Fishery Biologist at the Northwest Fisheries Science Center in Seattle, WA. He is a member of the Conservation Biology Division and the Integrated Marine Ecology Team. His recent focus has been the development of ecosystem models that simulate food webs, fisheries, and oceanography in a spatially explicit framework. The models have been used to test the direct and indirect effects of fisheries and fisheries management for forage fish, groundfish, and other species. He has developed and collaborated on models for the California Current and the Gulf of California (Mexico), and is supporting new projects in the Gulf of Mexico, Guam, and Chesapeake Bay. The ecosystem models are policy screening tools for strategic management planning, and have been included in NOAA’s Integrated Ecosystem Assessments.


Laura E. Koehn, Ph.D., is a post-doctoral researcher with Dr. Phil Levin at the University of Washington in the School of Environmental and Forest Sciences. Laura’s work centers around marine food-webs and how impacts at one level reverberate throughout the entire ecosystem, all the way to people. She explores these impacts using multiple modeling and statistical tools including large ecosystem models. Laura received her doctorate from the UW School of Aquatic and Fishery Sciences in 2019 where her dissertation focused on the impacts of forage fish fisheries on upper trophic predators including seabirds and marine mammals.  Laura’s other research interests include policy and science tools for ecosystem approaches to fisheries management, wildlife conservation, and societal impacts of climate change.


Nathan Taylor is currently the Head of Fisheries and Oceans Canada’s Pacific Region Conservation Section, in Nanaimo BC where he manages the section’s Cetacean, Pinniped, Aquatic Invasive Species, Marine Spatial Planning, Pelagic Ecosystem Monitoring, Species at Risk Act, and Pelagic Fish programs. His primary areas of research are the analysis of fish growth as well as developing spatial stock assessment and simulation tools for the harvest policy evaluation of fish populations that he has or currently applies to Pacific salmon, Pacific hake, BC herring, and Atlantic Bluefin tuna stocks.